Description: "Thallus of this common intertidal kelp is brown with a branched holdfast (haptera), a stipe, cylindrical near the base but flattened near the blade, that can reach 30 cm (12 in) or more in length, and a thin, lanceolate blade up to 3 m (10 ft) long with solid midrib. Twenty to forty elliptical sporophylls form in spring on the upper portion of the stipe and grow up to 25 cm (10 in) long, thickening with maturity." [Seaweedsofalaska.com]

"Habitat: This kelp is an annual found on rock in the mid to low intertidal from semi-protected (if there is sufficient current) to exposed habitats." [Seaweedsofalaska.com] "NE Pacific (Alaska to Oregon, Aleutian Is); Asia (Japan, Russia)." [Pereira ESW]

A. marginata; "Used as food in British Columbia (Canada) (Levring et al. 1969, Kuhnlein and Turner 1996, Zemke-White and Ohno 1999, Lindstrom 2006, Harrison 2013, Kellogg and Lila 2013, Edibleseaweed 2014). In Alaska, when fresh the midrib of Alaria is often cut out, creating two sheets and a thick celery-like stalk. The midrib can be chopped fresh and quickly stirfried. The two side sheets can be used like a tortilla. Rice and fish are piled in the center and the seaweed sheet is rolled. Dried fronds or strips may be broken into pieces. Store the pieces in airtight containers, in a cool, dry place (Garza 2005, Roo et al. 2007)." [Pereira ESW] "Alaria is tasty raw or lightly dressed with a vinaigrette. It is a great seaweed for cooking into sauces and soups." [Jones TDFB] "Used by Nuu-chah-nulth for collecting herring eggs; sometimes eaten with them" [Turner,Kuhnlein]

Preservation: "Sun dry, store in tight plastic bags, or freeze (if frozen, use within three months). Dried alaria, when reconstituted in water, is very much like the fresh plant. The fresh plant has a very short shelf life, even if refrigerated, so preserve soon after harvesting." [SV mcconnaughey]

Harvesting:"Late winter to early summer: clip the seaweed above the tonguelike leaflets (sporophylls) located near the hold fast. If harvested in this manner, the sea vegetable will continue producing new blade growth. Blades have been reported to grow over 12 inches within 24 hours. Late spring to autumn." [SV mcconnaughey] "Rinse kelp and Alaria (brown algae) in fresh water before drying." [Jones TDFB]

"Some species of seaweed – especially ... Alaria esculenta (L.) Greville – were gathered along the shores on some Faroese islands. Seaweed was still gathered as food in the 1930s [10,15,20]." [Svanberg and Ægisson]

A. crassifolia; "Used as food in China, Japan and Korea" [Pereira ESW]

A. esculenta; "The seaweed is edible and used to be commonly served either as a vegetable or a salad leaf in Ireland, Scotland and Iceland (Johnston 1970, Zemke-White and Ohno 1999); is also consumed in Siberia (Eidlitz 1969), Orkney Is and Norway (Kiple and Ornelas 2000); it is the only kelp-like seaweed in the British Is that has a distinct midrib and cannot be confused with anything else. It is also the only seaweed with sporophylls. In Canada and the US this seaweed is sometimes sold as “Atlantic wakame” and is presented as an alternative to Japanese wakame (Undaria pinnatifida)." [Pereira ESW] "The kind of algae the Chukchi preferred to use as food was Alaria esculenta. It was eaten fresh during winter and spring, although not the plant as a whole, but the midrib." [Svanberg EE] "Eaten in Ireland, Scotland (U.K.), and Iceland either fresh or cooked, it is said to have the best protein among the kelps and is also rich in trace metals and vitamins, especially niacin. It is usually collected from the wild and eaten by local people, and while it has been successfully cultivated, this has not been extended to a commercial scale." [Barsanti Algae] "In many cases, dried winged kelp can be substituted for Japanese wakame in recipes, but it requires a longer soaking time (ca. 20 minutes). After it has been rehydrated in cold water, dried winged kelp is almost as good as fresh. It has a mild taste and can be used as a salad. The midrib is edible if it is toasted and deep frying the sporophylls brings out a taste that is reminiscent of peanuts." [Mouritsen Seaweeds]

A. fistulosa; "Alaria esculenta (murlins) is eaten in Northern Europe and Iceland, and A. fistulosa by the Pacific Coast Amerindians." [Wickens, EB]

"Brown algae have been used as feed for a long time. According to Spolaore et al. ( 2006 ) about 5–10 % algae can be used safely as partial replacement for conventional proteins in poultry feed. They are also used to feed horses, cows and pigs. In maritime districts many seaweeds such as Sargassum , Fucus , Laminaria , Ascophyllum , Alaria also known as cow weed in Norway, Chorda , Pelvetia , Hormosira are also used as feed (Chapman 1970 )." [Sahoo TAW]

"In Finland and Norway, Laminaria sp. or Alaria sp. are often used as fodder for sheep or cattle." [Fleurence SHDP]

"The Icelanders lay in a store of seaweed for a winter supply by washing the plants and then packing them in trenches where they are compressed with heavy oak planks and stones. The compressed mass is broken up as required and fed to the animals without the smell or taste of milk from cows being affected. Sometimes Alaria, after washing, is air-dried and then stored in layers in barns, each layer alternating with a layer of hay. At least one seaweed meal factory has existed since 1960 and some weed is extracted to provide a liquid plant nutrient. In Iceland, geothermal heat provides a possible cheap means of drying the weed (Hallsson, 1964). In Finland, both Laminaria and Alaria are used as fodder for cattle." [Chapman SU]

"Palmaria palmata and Alaria esculenta have been used as winter fodder since the fifth century in north-western Europe (coastal areas) in feeding domestic animals: sheep, cattle and horses (Balasse et al., 2005). A. nodosum was extensively investigated as fodder for dairy cows, sheep, hogs and poultry and was showed to improve growth of animals if supplemented on the level lower than 10% (Craigie, 2011)." [HMA]

"As a result of these developments the production of fertilizers and potash salts from seaweeds was commenced on a commercial scale in 1912. The three kelps which occur in sufficient economic quantity are Macrocystis, Nereocystis and Alaria fistulosa. Pelagophycus contains a higher percentage potash than the other three, but it is not sufficiently abundant to be worked by itself." Alaria was the least valuable source of potash and iodine compared to Nereocytisus, Macrocystis and Pelagophycus, having between 2.9-13.1% (dry wt. %) potash and trace iodine [Chapman SU]

"Farther north, in Alaska, Alaria fistulosa is regularly employed as a manure for potatoes and the results are extremely satisfactory." [Chapman SU] 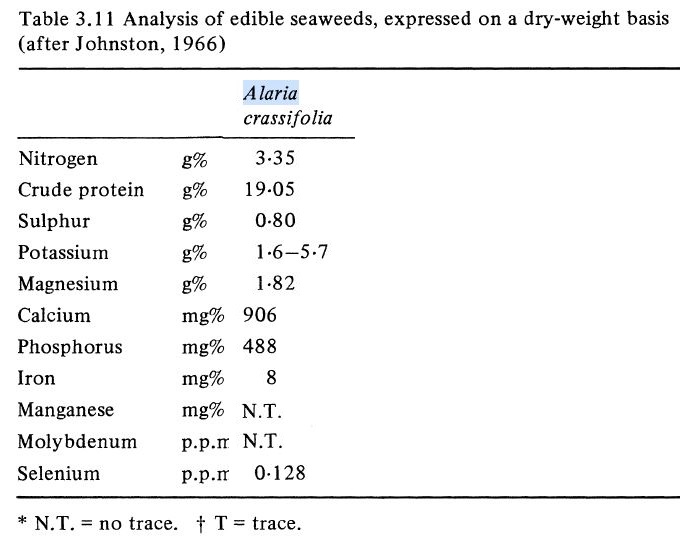 "Some fucoidans may contain fucose and galactose in comparable amounts. Such polysaccharides were extracted from sporophylls of Alaria fistulosa (Usov et al. , 2005)" [Dominguez FIAFN]

"Surprisingly, these authors observed absence of laminaran and fucoidan in Alaria species, which is known as a rich source of these polysaccharides."[HMA] "Laminarin consist of a group of {J-D-glucopyranose units linked through carbon atoms 1 and 3. They are produced by the brown algae, especially the sporophylls of Alaria and Laminaria spp. (kelps) and to a lesser extent by members of the Fucaceae (rockweeds), and by the Diatoms." [Wickens, EB]

"In the kelp Alaria, phlorotannin content of the sporophylls is much greater than that of the vegetative portions (Steinberg, 1984)," [Rosenthal HerbV2]

"An inhibition of alpha-amylase and alpha-glucosidase has been shown for various extracts of brown seaweeds such as Fucus distichus and Alaria marginata (Kellogg et al., 2014)" [Fluerence SHDP]

"It has been suggested that the positive effect of seaweeds is due to their enhancing the metabolic breakdown of estrogen, especially estradiol, in the stomach and the intestines. Clinical studies have shown that by eating five grams of brown algae (Alaria esculenta) daily, post-menopausal women in the West can reduce the estradiol level in the blood to the same level as that of Japanese women." [Mouritsen Seaweeds]

"Stimulating collagen synthesis is still one of the mechanisms most frequently employed to combat wrinkles. SEPPIC, a supplier of ingredients for the cosmetics industry, is offering a lipophilic extract of an edible brown alga, Alaria esculenta (Kalpariane® AD). A significant reduction of cutaneous progerin has been demonstrated (Verdy et al., 2011). The mutated form of the gene implicated in over 90% of the known cases of progeria or Hutchinson–Gilford syndrome, which is characterized by accelerated aging, was identified in the early 2000s. The gene involved is the LMNA gene, which is located on chromosome 1 and codes for the lamin A and C proteins. The mutated form of this gene produces a truncated protein, progerin, which remains anchored to the nuclear membrane in cells, where it accumulates and causes dysfunctions (De Sander-Giovannoli et al., 2003; Eriksson et al., 2003; Goldman et al., 2003). In addition, the A. esculenta extract is apparently capable of significantly reducing the expression of the Pmel17 gene implicated in the transfer of melanin to melanosomes. Hence applications in the area of age spot removal are conceivable (Verdy et al., 2012). The selling points of Kalpariane® AD are limited to claims that it increases the firmness and elasticity of the skin when used at a recommended dose of 1% in the formulated product. A. esculenta extract is one of the active ingredients of Algologie Firming Anti-Dark Spot Serum®." [Fluerence SHDP]

"Since Nereocystis is an annual and the large leafy part of Alaria is similar, both these plants have to be harvested after sporing has taken place, otherwise there might be no young plants to provide an abundant supply for the following season. North of Point Sur to Vancouver Island, July is suggested as the earliest month for reaping, whilst farther north in Alaska, August would be the earliest because development is somewhat later on account of the shorter growing season." [SATU, Chapman]